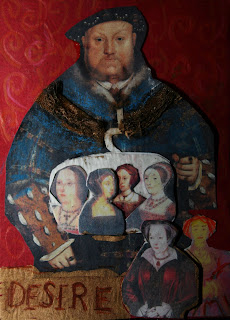 This is still one of my favorite cards. It was my first. The subject matter is a favorite of mine, the Tudor wives of Henry VIII. The placement of each wife is very significant to me. Those within Henry's belly beat him to the grave. Those outside outlived him.
~
On the far left we find Katherine of Aragon. The daughter of Ferdinand and Isabella of Spain, Katherine was raised to believe herself the true Queen of England since she was a baby. Bethrothed to Henry's brother who died 6 months after they wed, she was then married to Henry, a union that lasted 24 years. Katherine was Henry's political equal and he loved the challenge she presented. But after she failed to give him any sons that reached adulthood, he divorced her. She is first though because she was first.
~
Anne Boleyn, slightly in front of the others. She was a strong, single-minded woman. It is safe to say she wanted the thrown more than she wanted Henry. She was Henry's mistress for 6 years before they were finally able to marry. But though she was very politically minded, her temper was her undoing. She stepped on many people to get to the thrown. So the first hint of Henry's dissatisfaction with her was a great oppurtunity for her enemies. Anne was beheaded after less than 3 years of marriage.
~
Jane Seymour was Henry's ideal of the perfect submissive wife. Not remembered as being very smart or attractive; it was probably her sharp contrast to Anne that made her most attractive to Henry. They married 11 days after Anne's execution. It is debated whether Jane truly was submissive in nature or whether her family taught her to play the part in order to snare Henry. One thing is known. Jane was little more than a pawn for the Seymour families political aspirations. Jane died in child-birth less than a year into marriage. She did however give Henry the only son to reach adulthood. Jane is possitioned 3rd from the left but to the very back, good submissive wife that she was.
~
Next to Jane is wife # 5, Katherine Howard. She married Henry when she was 13 and he was 53. Katherine was a party girl; a teenage seductress. Katherine was also a pawn of her family and she paid the price rather quickly. Little more than a child when she became Queen of England, she had an affair with a member of Court and was beheaded by 15. Being the party girl that she was, she's pushed her way in front of Jane.
~
2 wives outlived Henry. They are on the outside of Henry's belly. The first is Anne of Cleves. Anne, a foreign bride, is said to have repulsed Henry with her odd dress and customs. The truth is actually that she hurt Henry's ego mere moments after their first meeting and he was never able to consimate the relationship. After less than 6 months of marriage Henry forced her to declare she was not legally able to marry him and had the marriage annuled. Anne was probably the luckiest of the Tudor wives. She escaped the wrath of Henry and lived a long comfortable life with the offical royal status of Henry's "Good Sister". Anne's on the outside of Henry's belly and hiding behind Katherine.
~
Katherine Parr is Henry's last wife. She's on the outside but standing in front of Anne. She was still married to Henry at the time of his death, though she had several close calls which could have cost her her head. Katherine was a feminist and married twice before becoming Queen of England.
Posted by heather noye at 7:18 PM

Nice collage. I had an obsession with Henry and his wives too - so fascinating, aren't they?