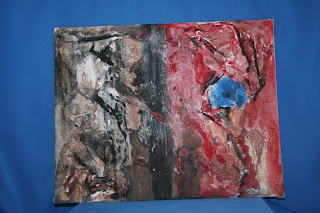 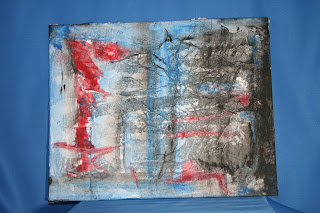 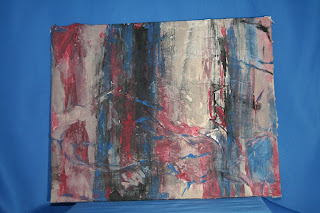 A few weeks ago I did a painting exercise.  I watched the movie Resident Evil, Resident Evil 2 and Resident Evil 3.  During each I did a painting.  I painted the mood of each movie.  I only allowed myself to paint during the movie.  There are changes I could make to any of these but that would defeat the exercise.
Resident Evil is primarily black and red, because it's a very dark movie with lots and lots of blood.  But I had to include a drop of blue for Mila's eyes.
Resident Evil 2 appeared to be filmed thru a blue filter.  So blue is the main color.  I still included black because it's still a dark movie.  And it's not Resident Evil without blood.
Resident Evil 3 had all the same colors.  But I also added sand because the movie takes place in the desert.  Of the desert that was Las Vegas, before the zombies.
I like Resident Evil 2.  I think it works as a stand alone painting.  The other 2 I flip flop on.  Some times I like them.  Some times I see things I could do to improve them.  But that would be breaking the rules.
Still, I learned alot from this exercise.  The technique, an acrylic wash over tissue paper gessoed to a canvas.  It could work for many other things.  Even a more literal subject matter.
Posted by heather noye at 11:53 AM