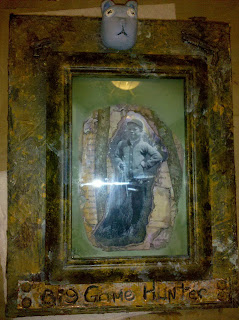 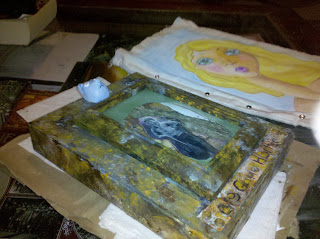 I don't yet have great photos of this assemblage. But I'm diggin' it. The cartoon nature of the bears head is intentional. It's part of the duel message about (1) kids with guns and (2) hunting.
(2) Now I'm not really anti-hunting. I personally don't want to do it. But I understand the consequences if controlled hunting is not allowed. But my commentary on hunting is the attitude where it's forgotten that their prey is a living, breathing creature with thoughts and feelings. Hence the cartoon nature of the bears head. The prey here isn't "real". It's Elmer Fudd huntin' Wabbits!
(1) The photo inside the box is of my grandfather. I've always loved the photo. Also it makes for great composition. And with the child holding a gun, the cartoon bear and the toy, plastic guns attached to the outside of the box, the gun becomes a game. Something not real. How can something not "real" cause so much pain and damage?
So the box is a reminder to myself to understand the consequences to one's actions. While something can seem carefree, casual, even a joke or game, there is always a butterfly effect to everything we do. It's also a reminder to remember to respect all living things. The biggest baddest creature still feels pain, just like the smallest most benign creature does.
Posted by heather noye at 7:04 AM

Fantastic blog post. THIS is why I consider you a friend. Awesome job, all around!

Awesome post and I love the photo of your grandpa!!

I love meaningful art...this is a wonderful piece.
xox

I love this! Love the meaning and thought behind it and the composition is fantastic!