Sunday morning, 09/11, we decided to go check out the new SculpTour in the City of Suwanee. It must have been fate because we didn't realize that Suwanee has a piece of the World Trade Center as a centerpiece of their park. It was very sobering to see this piece of twisted metal on such a noteworthy day. 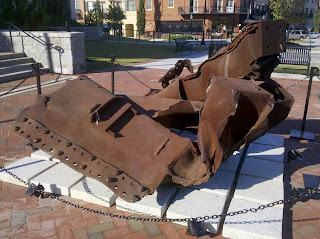 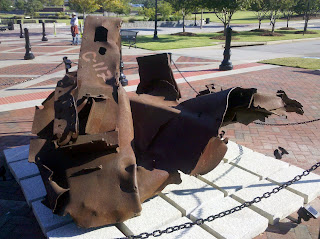 After paying our respects we went off to discover the beautiful sculpture scattered around the park. There are 15 pieces (I think... 15 or 17). I didn't take pictures of them all. Some of them just didn't do anything for me. Others were kind of hard to photograph. But below are a few of the most eye-catching of the group. 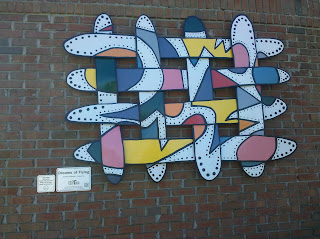 Dreams of Flying by Harry Zmijewski: "using a creative process much like that of a child: fresh, clean and, simple. The sculpture is constructed of reynobond with a steel frame and mount. It weighs 65 pounds and its dimensions are 72”x48”. " 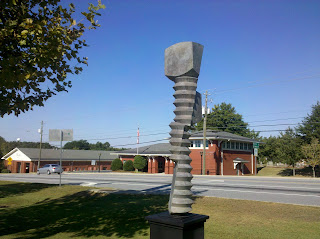 Deconstructed Bolt by Andrew T. Crawford: "Directly referencing the techniques of collage, this piece looks as though it has been cut apart and rearranged creating a playful gesture in an otherwise stationary object. The sculpture is fabricated of galvanized steel and weighs 190 pounds. Its dimensions are 89”x 12”x 12”." 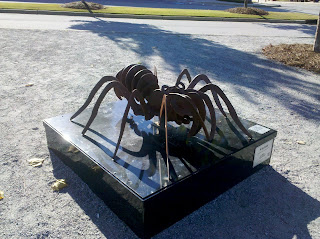 Arachnid by Damon Lusky: "Inspiration comes to Damon Lusky from memory of childhood toys. “You know when you see something and you have that moment of reflection and you feel a smile on your heart,” he says, “I think that’s what I'm shooting for.” Arachnid is around knee tall and 10 feet in diameter. It weighs approximately 200 pounds." 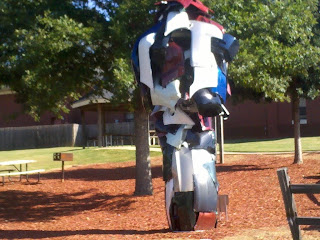 Amne by Harry Zmijewski: "Amne is a Tibetan word that represents a tall cloth-covered pole with tassels at the top. They are located in villages, monasteries, and parks, among other places. These poles are symbolic and made to protect the people where they are located from harm. In the artist’s version, he has used recycled car bumpers to form the contemporary abstract sculpture that resembles the Tibetan amne. The piece weighs 500 pounds and its dimensions are 15’x7’x7’." 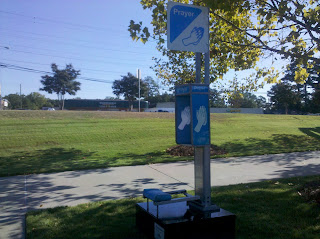 Prayer Booth by Dylan Mortimer: plays on the idea of faith in the public realm. By morphing a telephone booth into a prayer station, the piece invites viewers to participate, or at least think about, the concept of prayer. It fuses humor with seriousness in order to ask questions about faith in public. Prayer Booth has been displayed in Kansas City, Chicago, Baltimore, Cedar Rapids and Dubuque (Iowa), New York City, Jackson (Tennessee), and Olathe and Lawrence, (Kansas). The piece is constructed of aluminum, vinyl, and plastic. The sculpture weighs 100 pounds and its dimensions are 110”x21”x24”. " 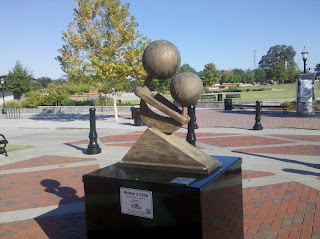 Mother and Child by Eluisa Altman: "represents the child as an extension of the mother. As the child begins to slip away, the mother stretches her arms as far as possible to hold on to her. The sculpture is minimally detailed but is meant to portray a strong family feeling. The piece is constructed of resin and weighs 78 pounds. Its dimensions are 33”x31”x12.5”. " 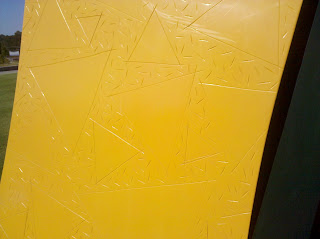 detail of Intrusion by Harry McDaniel 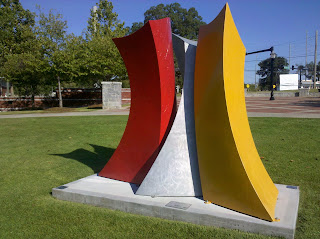 Intrusion by Harry McDaniel: "an exploration of the interactions and energy created by pushing three large irregular forms very close together. The composition conveys a sense of tension between the three sections. The matching curvature of the gaps between sections draws the viewer’s attention into those spaces. The middle section, differently finished from the other two, seems to be forcing its way between them, thus the title. The piece is constructed of steel, aluminum, and powder coat paint. Intrusion weighs 600 pounds and its dimensions are 7.5’x 9’x 4.5’."
Posted by heather noye at 7:22 AM