I love adding copies of old family photos to painted canvas's. As the Official Family Historian and Keeper of the Photos, I often use copies of these old photos in family presents. Over the years I've made mini-family history books, painted canvas's, greeting cards, what-have-you. I've also been working to get every photo scanned so the whole family has a copy of all of them.
I made canvas's similar to the ones below for my Dad. He said he though my Uncle Bruce would also like them. The colors are slightly different from the ones I made Dad. I just can't do the same thing twice. 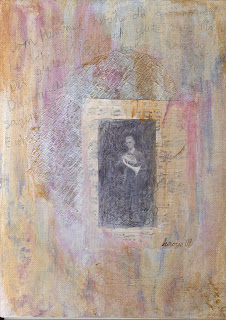 This is my Papa, Eben Stowe Smith. Or so we thought! People always wanted to call him Ebenezer and he always said that wasn't his name. His name was Eben. Well turns out he was telling us a story. lol He just didn't like Ebenezer so I guess he disowned it. Papa was very musical. I have lots of pictures of him with the church choir. But the photo above is the only one I've seen of him with an instrument. It's a french horn. 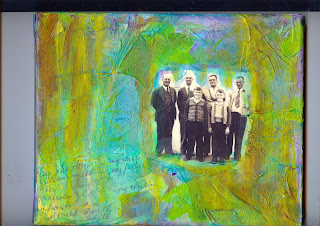 This photo was taken at Ocean City Beach, Maine. I think it must be taken around 1944. My Dad was born in 1934 and he looks about 10 in that photo. He's the one in the front row on the left, wearing the sailor hat. His brother, Bruce is on the right... making a face. That's my Uncle Bruce for ya! The backrow has my Dad's Uncle, Malcolm Babbs. Next to him is my Dad's grandfather, my great-grandfather, William Smith. My Papa is next to him and on the left is my Dads cousin, Malcolm Babbs jr. I'm rather fond of the colors in this canvas. When I painted one for my Dad, I primarily worked in blues. For this one I branched out a little more.
I'm mailing both of these to my Aunt and Uncle tomorrow. They don't own a computer so I'm not worried they might get a sneak preview.

These are very cool! Your Aunt and Uncle will treasure them!!

What fabulous gift and idea! I just adore old photos. I might have to lift this idea.