I wish I had fabulous pictures to share with you all of my day soaking up the wonderful aura of His Holiness the XIV Dalai Lama. And thought He radiates pure white light, it's rainbow colored aura I might add. Sadly all I have are these blurry camera phone pictures.

We had general admission tickets. So we were pretty far back. But the large screens helped. And we could hear everything (though the Dalai Lama switches back between English and Tibetian rather rapidly!!!)

I thought the discussion was very interesting. We covered a number of topics. The one that I'm still thinking about is whether we as artist have a responsibility to produce uplifting work? Or is the artist's job to show the darkness in the world, allowing the viewer to compair between light and dark? Very interesting stuff!!! As someone who gravitates towards sadness and gothic images, I've been wrestling with these thoughts for as long as I've been painting and sculpting.

This is the ever handsome Mr Richard Gere... from a great distance lol 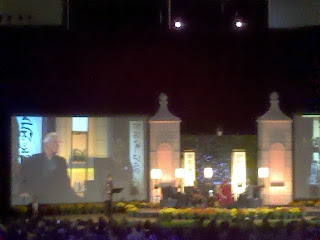 2 pictures of His Holiness the XIV Dalai Lama 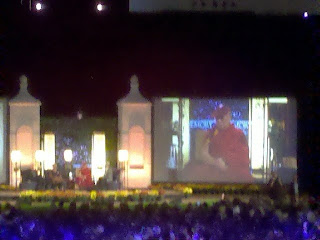 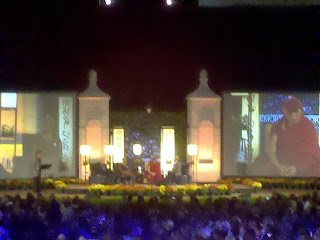