Always a man of visions, Howard had his first vision when he was 3. He saw his recently deceased sister Abbie Rose walking down out of the sky wearing a white gown. She told him, "Howard, you're gonna be a man of visions."

In the late 1940's Howard started building a garden park museum on his property in Trion Georgia which he dubbed the Plant Farm Museum. His idea was to display one of everything of all mankind's inventions. One could never say Howard didn't dream big! In 1961 he ran out of room on his Trion property and moved to 4 acres in Pennville Georgia (now part of Summerville).

In 1965 after many many years of preaching, one Sunday evening Howard was visiting with some of his flock. He asked them all "What did I say in this mornings sermon?' and not one person could tell him. That was when Howard retired from preaching and put all his focus on his Plant Farm Museum.

In 1976 Howard was working on some bicycles when he had another vision. In Howard's own words: "And one day I was workin' on a patch job on a bicycle, and I was rubbin' some white paint on that patch with this finger here, and I looked at the round tip o' my finger, and there was a human face on it... then a warm feelin' come over my body, and a voice spoke to me and said, 'Paint sacred art.'"

Howard was a character. Clips of interviews with him are all over YouTube. And they are worth the watch. Howard came to prominence when the Athens rock band R.E.M. learned of him. They used his art on album covers and in videos. The video for Radio Free Europe was films at his Paradise Gardens. In 1985 Howard's painting for the Talking Heads album cover Little Creatures was named Album Cover of the Year by Rolling Stone magazine.

A trip to Paradise Gardens is a must for anyone interested in art and the perseverance of the human spirit. Here are a few pictures from our trip.

My sister Lynn in front of Paradise Cottage 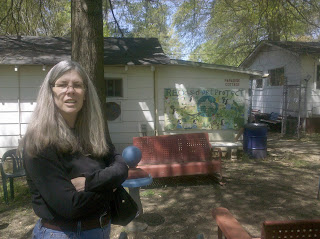 A view out into part of the garden. This structure (which houses artwork by many artist influenced by Howard) is called The Bridge. 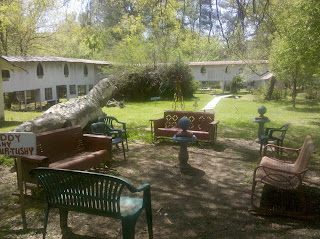 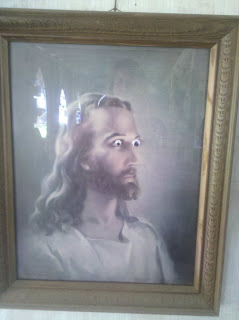 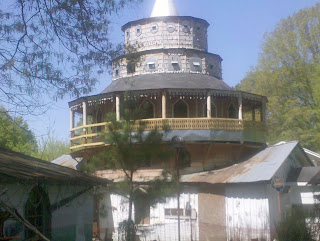 one small view of the bicycle tower. This structure is MASSIVE. It must be 40 feet around and 25 to 30 feet tall. You used to be able to walk thru it but it's now so overgrown. 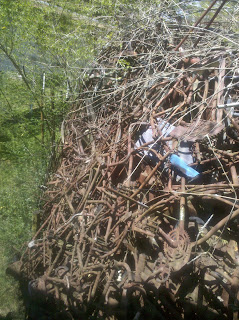 I don't know the offical name for this. But I've always called it The Disco House. It's a treefort-like structure completely covered in mirrors. 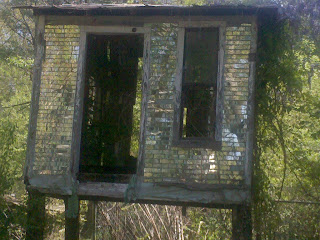 Both my sisters, Lynn and Sonia. We've been calling this one: Coke Thumbs Up 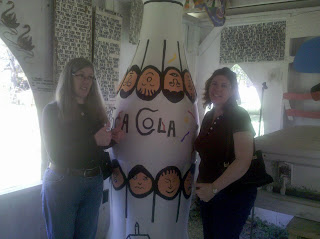 And this one: Death Thumbs Down 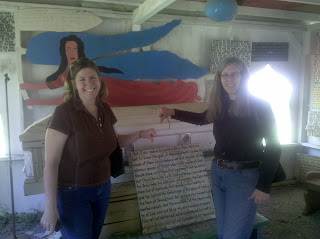 A detail of one of the many cement towers on the property. This tower is composted completely of different faces. It's my favorite of all the towers. 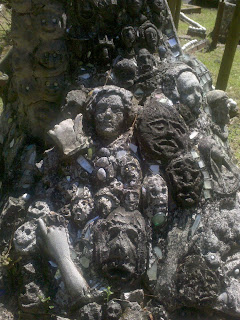 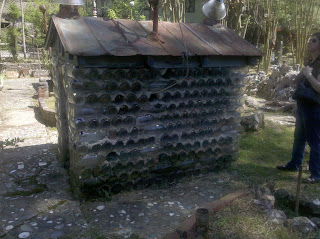 Thank you for viewing my pictures of Paradise Gardens. Paradise Gardens is a rare thing. Art Enviroments generally have a very finite lifespan. Paradise Gardens has been maintained by the Finster family and volunteers for the Paradise Redemption Project. It is my belief that Paradise Gardens should be declared a National Historical Site and restoration funded by Government grants. There are steps in this direction but it will be a long and slow process.
Posted by heather noye at 6:05 AM

That is absolutely totally fantastic!!! What a great place on earth :) thanks for sharing about it!!!

Wow! Thanks for sharing all this. It's very cool!!

I grew up in Georgia and I believe as a child we went by and talked to him. My family is into the plant business in Florida. How cool that it is still maintained. I do think it should at the very least be made into a Park for all to enjoy. Thank you so much for sharing your visit. Wish I could have joined you.

Wow, I would to visit this place someday. I especially love the bottle house. Now how freaking cool is that? LOL Thanks for visiting me so I could find you. LOL As for the knitted washcloths, yip...once you get them you will never buy a store, China Made washcloth AGAIN! LOL Have a wonderful and creative Weekend.
P.S. It looks like you guys had a lot of fun on your visit!

A friend and I stayed in Paradise Cottage one weekend years ago. It was fantastic (and a little scary)!
Thanks for bringing back a wonderful memory.

Howard Finster is one of my favorite artists. I only wish I could have met him. He must have been quite a character. Thank you for sharing this.