I don't know if the picture if finished. But ~she's~ finished. I envision a lot of things going on around her. But for the moment, with all the things that are currently going on now, I've just lost steam.

Sorry for the dark picture. I snapped her with my cellphone when I was running out the door to work this morning.

But back to HER (cos it ~is~ all about her), I like what she became. She has 1970's Rosanna Roseannadanna fizzy hair which brings to mind a Disco Queen. The other things in the picture with probably change her from a Disco Queen. But for the moment she's soaking up her royal status. Maybe she needs a crown? 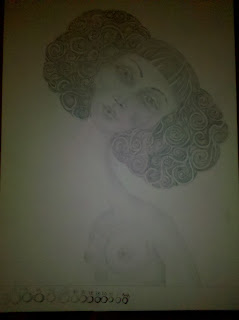